A friend of mine had a saying, something like “You can’t drag someone across the finish line.” He wasn’t talking about a race, or literally dragging someone, but about working with someone who was not willing to put a solid effort into their job; someone whose 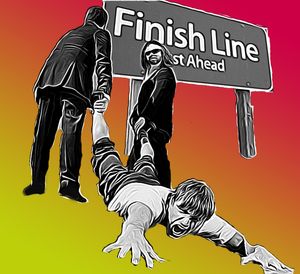 actions (or inactions) were detrimental to the forward movement of the company or the team. You might say they have a “negative attitude.”

For years I have tried to embrace the "PMA" philosophy in life. That is "Positive Mental Attitude," and many, many motivational speakers and life coaches use this as a foundation to their teaching programs. I discovered Napoleon Hill, Dale Carnegie & Zig Ziglar while still in my early twenties, and much of what they said made sense to me. Now, of course, the whole "self-help" thing has become an enormous industry, and much of what is being put out there is pretty silly. That said, I still believe in trying to be optimistic and positive.  Life is certainly more enjoyable for me when I have a positive outlook.

I find being around negative people and complainers to be draining. Sure, we all need to vent once in a while. And true, looking at potential ways things could go wrong (or really wrong) can be useful for planning. Unfortunately, at times I have been surrounded by people that seem to want things to go poorly. They were so pessimistic that they were not even willing to make a minimal effort at doing something new. I would try to infect them with “PMA” and coax them into giving a solid attempt at whatever idea I was promoting.  On occasion they would agree to try, but when it came down to actually doing something they would drag their feet, complain, and in the end they would actually torpedo the project with their actions (or lack thereof).

Sometimes I felt they were doing it deliberately, just so they could say “I told you so.” But I would try again. And again. Yeah, often with these same people. I was trying to drag them across the finish line, which is foolish. You need a team that is going to work with you instead of against you if you want to meet your goals. It’s okay if someone sees problems, as long as they are willing to work on solutions for the problem.

In my many bands over the years I have tried dragging a lot of folks over the finish line. It has often had a negative effect on my “PMA,” as have life events that no one could control. These last couple of years have brought many challenges for me as a musician and as a person. I have been trying to channel the adversity into new (and hopefully interesting) music. In the process I have come to realize how much of my energy has been spent trying to drag other people across the finish line, and how that has been crushing my positive attitude. Sometimes I find myself thinking “What’s the point?” I have to admit, it began to happen a lot around the end of last year. 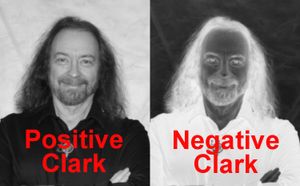 I am trying to snap out of it, and go back to the “PMA” lifestyle by doing several things: surrounding myself with positive, “can-do” types of people; avoiding the negative & hateful posts on Facebook & Twitter; not complaining to myself silently or verbally to others; setting small goals for each day and focusing on them, rather than the seemingly insurmountable long-term goals I’ve set; exercising; and taking time to spend with my family. It’s working. I like Positive Clark way better than Negative Clark. As a result, the recording process for “Obscurotica” is back on track, and while it may not be released by the end of the year, it will be out soon after.

So, to all my friends & fans: thanks for sticking around. Stay positive, be kind, live well, and rock hard!